On March 19th Claudia Garduño and I had a meeting with Damaris Garza, business manager from EVI, an enterprise which distributes geosynthetics that are used to protect the environment, improve land qualities and water purification.

We had an introductory conversation about some personal issues including my architecture studies, where she said their enterprise is usually committed to incorporate green roofs above public buildings, one of them was incorporated on a building designed by one of the most important architects that Mexico has had, Teodoro González de León. She said is very complicated to “touch“ a patrimonial place because that involves too many laws and too much to take care of.

Then while we were introducing the ALM 2015 project, she immediately shared with us the possible solutions to the water purification at El 20. One alternative is to construct a traditional filter conformed by gravel, charcoal and sand where water obtained in this process then has an aeration (which consists into oxygenate the water by using ventilators) all this makes this system difficult to maintain.

Then she suggested that the best option is to implement a collective water tank using a polyethylene geomembrane with polyethylene tube connections to the houses. 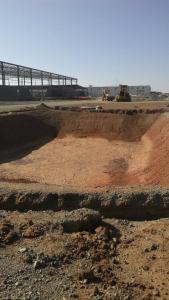 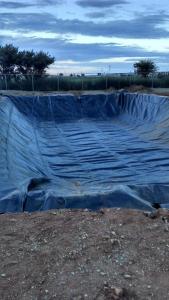 But wait!!! El 20 actually has a tank that is not used. This one could be reused adding a polyethylene geomembrane which will cover the structure and it will storage the water collected. To purify water we should add a Reverse Osmosis System. In addition people would have to provide periodically a dosage of chlorine. For implement this system we need a system called Reverse Osmosis which purifies 2,000 gallons of water per day and it costs around $72,350.00 mexican pesos (around $4,748.217 dlls) and the membrane could be installed by Damaris team. Also we should need a bomb as the ones that are used in all over Mexico. We can reuse one, the main thing is that is still working well. This is a convenient method because we can use the existing tank as the system that distributes purified water to all families who live in the community and at the same time it reinforces their identity as a group and their relation between them and the place. 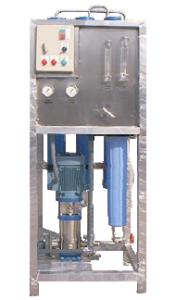 She pointed the fact that Calakmul, etymologically known as the city of the two adjacent mounds, is located in fact between two mountains, so that causes the air flows have some dirt which has an impact in the rainwater making it hard water, in simple words in reason of its geographical location.

For implement a water purification system she suggested to alternate systems (maybe using a filter and a natural purification system), but we pointed that the community needs an efficient and simple system that is not very difficult to maintain.

Concerning to water tests she suggested to test a high percent of the existing family homes. So if at El 20 there´s a total of certain number of houses, we should test at least a high percentage of the total, then we can get optimal results. We have to choose the same water volume, from the same source and the same charge mode. Also need to classify the tests at the same date, same season and same weather. Is not the same to test in a sunny day than to test in a rainy one.

She recommended us to implement a Rotoplas filter that purifies water, it costs around $219.00 mexican pesos ($14.40 dlls) but it needs to be changed periodically.

Next, we emphasized the idea of making a regional system, that could be not difficult to maintain or to develop by people from El 20 so they can give continuity usage to the system. In relation with this idea, she said there´s a type of purification by using plants, is economic and natural but it’s very hard to maintain. We shared our desire of making an individual purification system for each family but she pointed that is better to make a centralized system that connects to all houses, this system is the tank that she suggested at the beginning of the talk.

As an economist, she pointed that we should have quantitative data that could be very useful for obtain some sponsorships and governmental support, this data has to be related into the impact that the project will give to the existing population in Calakmul.

For the future soup kitchen, expected to be designed and constructed in subsequent stages of this workshop, she suggested to check out a government initiative that promotes community kitchens called “ Programa de comedores comunitarios, en el marco de la cruzada contra el hambre¨, promoted by SEDESOL. This program aims to develop organizational processes and methodologies in the communities which permit people to get involved in the operation of the community kitchens which are going to improve nutritional conditions in the context where will be established. (further information could be read on spanish in the next link: http://www.normateca.sedesol.gob.mx/work/models/NORMATECA/Normateca/1_Menu_Principal/2_Normas/2_Sustantivas/Lineamientos_Prog_Comedores_Comunitarios.pdf)

Concerning to the purification method realized by ALM 2012 she pointed that method used is not suitable, so she suggested to use crystal bottles instead of plastic bottles but also is necessary to make a research concerning into the way in which U.V. rays pierce the water and reflect inside of it.

Further information about Damaris sustainable business could be found on spanish in the next link: http://www.evi.com.mx/

As a result of this talk, one of the main goals will be to design as much as sociologically, ergonomically and anthropologically the approach to the water purification system.